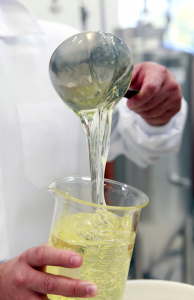 High fructose corn syrup can be found in almost everything. Is it the “fruit of the devil” or is it really just a sweetener? Are there more problems with it than just being a sweetener? There’s been a lot of controversy over HFCS. When you think of sugar, you generally think of the white stuff in the bowl. Starting in the mid 1970’s, HFCS began to sneak into our food and beverages. Now it makes up >40% of all caloric sweeteners added to food and beverages. The annual intake has increased 1000% since then. American’s health has suffered. Is this just a coincidence? Is there a potential cause here too?

Is HFCS an innocent vegetable or is it liquid death??!!

It’s in everything: soft drinks, fruit juice, frozen yogurts, ketchup, canned fruit, cereal, etc.… It’s in so many products now that if a product doesn’t contain HFCS there will be a label on it stating there is no HFCS.

HFCS was introduced in 1957. It’s a chemical reaction that changes starch in corn to a true sweetener. The industrialization didn’t occur until the mid-1960’s. This was also the time when Castro took over Cuba. A lot of the US sugar came from sugar cane grown in Cuba. When Castro came into power, there was an embargo and we couldn’t import sugar any longer. We had to find a different sweetener and we had lots of extra corn. The farmers were really good at it. High tariff on cane and subsidies for corn farmers made HFCS extremely cheap. So it made its way into just about every food product that uses sweetener.

The problem was we didn’t know if there was a difference between one sweetener versus another. Corn is milled to produce corn starch. Corn starch is processed to yield corn syrup which is almost all glucose. Glucose by itself isn’t very sweet. A number of enzymes are sequentially added to change some of the glucose to fructose. Fructose is a much sweeter sweetener. The typical final concentration of HFCS used in most foods and beverages is about: 55% fructose, 42% glucose, and 3% other sugars.

Why should we care?

Is it really natural? In the chemical transformation could there be mercury contamination? That was a question back in the early days. The other thing that occurs when we do this enzymatic reaction is the formation of carbonyls. Carbonyls can potentially be formed in carbonated beverages. It typically comes from HFCS. The problem is carbonyls can increase cellular damage potentially leading to diabetes. Is it from the carbonyls or from the sugar itself? This also was a time when Americans were taking in a lot more sugar and carbohydrates. It was around the time people were talking about low fat diets. Which change in our diets caused the most problems? It’s hard to tell.

Regular sugar comes from processing sugar cane or sugar beets. Sugar is sucrose. Sucrose is a disaccharide (2 sugar molecules). Sucrose is a glucose and a fructose bonded together. When sugar is digested it’s broken down into 50% glucose and 50% fructose. That doesn’t sound much different than HFCS. There is a difference. Sucrose does have more steps of digestion. HFCS are monosaccharides and don’t need to be digested. The percentages are different than sugar.

Sucrose has the same molecular formula as the glucose and fructose but there’s a lot that has to be broken. It takes more to break it down and utilize it. Is the fructose the problem and not the glucose? Glucose is what we utilize as an energy source. Any carbohydrate we take in that’s used as an energy source is eventually broken down into glucose. Could it be the fructose? Inherently it doesn’t make sense. Fructose is “fruit sugar.” Historically man ate only a small amount of fructose (<15 grams/day). We didn’t have big fruit farms or anything like that. Hunter/gatherers would stumble on a fruit tree every now and then. Nowadays we routinely get about 80-100 grams/day. What could possibly be bad about fruit sugar?

There is a difference between how fructose is digested and the way glucose is digested. Glucose is a simple sugar. It’s what we use as an energy source. It can be burned for energy is every single cell of your body. Mitochondria in the cell metabolize glucose to ATP (energy). ATP is adenosine triphosphate. This is where our energy really is. Glucose can also be stored as glycogen in the muscles and liver. It can be utilized as an energy source or be stored later.

Fructose is metabolized much differently. It’s also a simple sugar. The chemical structure is similar but it can only be broken down in the liver. The rest of the cells in our body can’t actually utilize it. It’s broken down to acetyl CoA. This is the starting point of fatty acid synthesis. This can make your triglycerides, LDL, and HDL worse. This is where fatty liver comes from. This opens the flood gates of fat deposition. When you have fructose it doesn’t actually make your blood sugar go way up. Glucose makes your blood sugar go up.

Fructose can stimulate hunger and indiscriminate eating by NOT stimulating Leptin (a “fullness” hormone) and increasing Ghrelin (a hunger hormone). It won’t make your blood sugar increase, but will worsen insulin resistance, subsequently leading to increased blood sugars and fat storage. Fructose can also cause a depletion of inorganic phosphorus in the liver cells leading to fatigue (due to decreased ATP). If you decrease the phosphorus you have less energy. Fructose can do a number of things that can really work against you.

There are many potential consequences of excess fructose consumption. The biggest consequence is obesity. Fructose turns on fat accumulation everywhere. Once the fatty acids are made in the liver, they can be deposited anywhere. As I mentioned earlier, fructose can cause fatty liver. It worsens lipid profiles: worsens triglycerides, lowers HDL, and raises LDL. It increases hypertension because insulin makes you retain water. It tends to lead to diabetes mellitus. That leads to increased risk of diabetic complications (neuropathy, retinopathy, and kidney problems). It increases uric acid levels. Uric acid leads to gout. And, fructose also causes an increase in accelerated aging-formation of advanced glycation endproducts (AGEs). That means a sugar molecule gets stuck on other things. If it gets stuck on other proteins that means they can’t function normally. It’s cellular aging.

In summary, there is probably nothing good about HFCS. It’s probably not just the HFCS that is the “fruit of the devil.” The real problem is the fructose itself. The real wolf in sheep’s clothing is likely the fructose itself. Since about 50% of all caloric sweeteners is fructose, you ought to do your best to try and avoid any of them. That doesn’t mean we go crazy on artificial sweeteners. There are potential problems with those too. But that’s another story! (Read more in Artificial Sweeteners – Pros, Cons & Weight Loss)